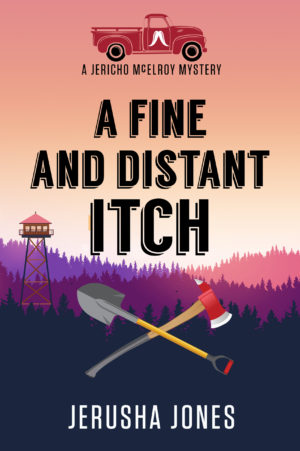 You know what causes turmoil in a rural county?

Money. Lots of it. Being handed out like candy. But beware—the candy comes with caveats.

Which Jericho McElroy knows all too well.

Small versus big; little versus great; novices versus titans; just barely scraping by versus unfathomably deep pockets. One could almost say David versus Goliath, except Goliath’s the name of the dog, and he wouldn’t appreciate the insinuation.

Jericho knows the underdog in the case. In fact, Gladdie Plew is bunking in one of his trailers at the moment. She’s one feisty widow lady, but is she in over her head? Now that Bud Leach, the county prosecutor-elect, is on her side, she has a shot at justice, but has her grief taken her one step too far?

With a new grandniece on the way and a grandnephew to watch over and a steady squeeze who deserves romantic dates and a thriving business to manage, Jericho was hoping for a little peace in his life. Not for murder.